Second-Year Educator Has Made an Impact 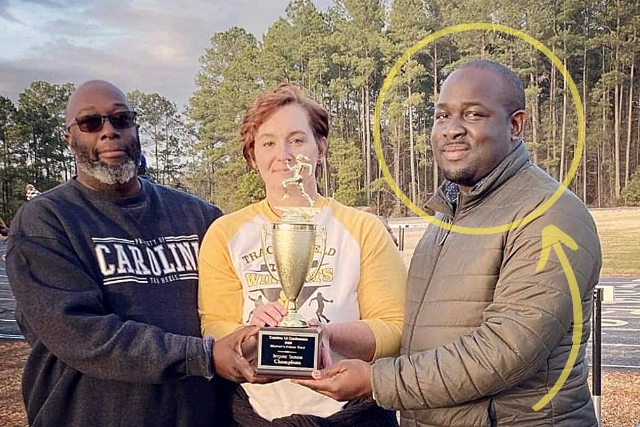 Eric McDonald, who teaches civics at Hobbton High School, shares a bit of his experience since living in the US. Eric teaches and coaches at Hobbton, specifically working with both girls and boys in track & field and being the head coach of the girls’ varsity team.

Eric is in his second year in the United States and has made quite an impact in his school community already. Please read on below to learn more about Eric’s journey and how he has made a difference in the students’ lives at Hobbton High School in Sampson County.

I played field hockey at the high school and the intercollegiate level as a student. My sojourn into coaching and sports administration began when I returned to teach at my alma mater, Munro College (Jamaica).

In 2012, I was drafted to become a part of the school’s soccer management team. Through this initiative, I realized that I was able to build better relationships with students and use sports to improve their academic performances.

Two years later, I was involved in all the school’s sports programs. With my involvement in sports, whether in administration or coaching, the school secured a top ten finish in track and field at the National Boys Championship.

Additionally, we successfully attended the Penn Relays, receiving multiple championships in the field competitions. Under my leadership, the school also received hockey and badminton medals, among other such achievements.

Having worked in Jamaica, I have seen firsthand the positive impact sports can have on children. So when I joined the Hobbton family, I was eager to get involved in its sporting programs. Wherever I work, I make it a part of my duty to get involved in the school’s extracurricular activities to contribute to its growth and development.

I initially agreed to render assistance in developing the skills of the soccer players. However, with the departure of the track coach, I was asked to assist the track team, an offer gladly accepted.

Education is not just limited to the classroom, and these activities serve as platforms to positively impact the teaching-learning process. It can be used as a tool to drive academic performances and improve students’
behavior while simultaneously allowing students to grow.

Being a coach at Hobbton has allowed me to build better relationships with students. It has also allowed me to understand their culture better and share my culture with them.

This role has positively impacted my work in the classroom as my classroom management has improved, and we have created a sense of mutual respect. As such, the environment is more conducive to teaching and learning.

I have found that the more involved one becomes, the greater the level of respect students will develop, and this is even evident with students one does not instruct. I love sports and enjoy any activity which will aid
students to become a better version of themselves.